COP20: “Don’t come to Peru if you don’t want to change the world”

One of the highlights of the UNESCO World Heritage site of Central Lima are its balconies. They were so popular during the Viceroyalty that Lima was also Known as the City of Balconies. Photo via Visit Peru.

UN Framework for Climate Change  (UNFCC) Cop 20 Lima, the cornerstone  for commitment to the future of our climate.

In 2015, the most important climate change decisions will be made with the design and launch of the Sustainable Development Goals (SDGs).

This year, on  December 1-12, Peru will host the 20th Conference of the Parties (COP) to the United Nations Framework Convention on Climate Change (UNFCCC – COP 20), during which a draft text will be produced for a decision at the Paris convention the following year. This will shape our approach to climate change over the next decade and very much determine the scale of its impact on our future.

“Pon de tu Parte” (Do your part) NGO campaign for Climate Change towards COP 20 in Lima. Photo via COP20.pe

Last June, a zero draft on the SDGs was created, with 17 potential goals. Although this number will most likely be reduced to 10 or less in Peru, the focus was predominantly applauded for its approach. Jeffrey Sachs, director of the UN initiative the Sustainable Development Solutions Network (SDSN) and the UN secretary-general’s special advisor on the SDGs expressed his expressed his delight with the first goal being focused on the ending of extreme poverty.

He further went on to praise the scientific base of the draft and insisted that scientists in a variety of fields, from climate to ecology, need to be outspoken in the production of the goals. The two degrees Celsius limitation in global warming is one such area where science has led to comprehensive adoption by the UN Framework.

The first ever United Nations Environment Assembly (UNEA), held in Nairobi, Kenya, last month, had a keen focus on the upcoming COP 20 in Lima and on the wider SDGs. Earlier in the month, at the G77+China summit in Bolivia, the Peruvian President Ollanta Humala Tasso met with the United Nations’ Secretary General Ban Ki-moon to discuss his country’s hosting of the COP 20 and to reiterate Peru’s commitment to climate change.

Launch of the “Pon de tu parte” (Do your Part) campaign for climate change in Lima that seeks to ensure that citizens, businesses and organizations are informe, are infomred and commited to specific actions to adapt to climate change and mitigate its effects.

The COP 20 will focus on four key areas – Adaptation, Climate Finance, Mitigation and Technology – with Peru a suitable choice as host. The 29th State of the World report from the Worldwatch  Institute in 2013 hailed Peru as the only nation hitting the ‘sustainability sweet spot’. This was due to the balance, based on 2007 date, they had achieved in human development and resource consumption. This was also assisted further by the commitment of the country’s Environment Officer to eliminate deforestation, whilst the President vowed to fight any trace of environmental pollution.

Peru faces a tough task in delivering a draft at COP 20, in time for the 2015 Paris summit. Clever diplomacy is earmarked as being key; and with the 195 member countries showing disparity in their current positions, the process will certainly not be free from hurdles. Despite this, there has been some tentativeness in the mission of the summit, with Peru’s President keen to point out that the event marks the start of a new chapter more so than the closing of a book. Aiming too high has cost the COP dearly in the past and thus Peru has been focused on maintaining a balance between making a big impact and realism.

The hosting of such a key summit comes at a time where Peru is staring down the barrel of climate change domestically, with the country susceptible to devastating impacts if both domestic and global action isn’t taken. As the host, positive dialogue and adequate pressure must be put on the biggest emitters, while at the same time ensuring the inclusivity of the lesser developed countries.  Peru’s COP 20 slogan is “Don’t come to Peru if you don’t want to change the world”, and with such a bold start, it is crucial that they deliver.

Ministry of Environment of Peru with UNFCC and multi sector leaders for COP 20 Lima.

SIF 14 will be a key event in the progression of the issues being discussed at the COP 20 and presents a great networking, ideas sharing and debating platform.  Key topics that will be addressed centre around innovative finance, adoption, mitigation, resilient cities and energy efficiency.  Event Director Claire Poole commented, “Lima represents a crucial milestone in the climate change dialogue, it’s vital that all stakeholders, not just the usual suspects on this world stage, are part of the conversation.”

More details on this year’s event can be located at http://cop20lima.org, with the event promising to be as innovative and impactful as last year. Source: cop20lima.org.

Our Society for Sustainable Tourism & Development Inc. -SSTDI offers Capacity Building and Training programs  to public and private stakeholders, host communities and grassroots in sustainable tourism development & stewardship to include Good Governance, Climate Change Mitigation , Disaster Preparedness and Management. Waste to Energy projects are offered to LGUs for their ecological solidwaste management and renewable energy solutions. For more information and assistance, contact us.

The Boracay Initiative beckons – a serious call for conservation

We know the problems, we know the solutions. Sustainable development. The issue is the political will. ~ Ex PM Tony Blair

At Boracay White Beach, circa 1990 where Discovery Shores is now.

LOVE AT FIRST SIGHT.  I first went to Boracay Island, Philippines (voted as one of the best beaches in the world) in the late 80’s and we had a most fantastic experience in paradise. We travelled in the typhoon season; there were no air-conditioned buses for the long, dusty and grueling overland ride with the locals and chickens alike; no jetty port – we had to wade in shallow waters to board a motorized small banca,across the strait in rough waters. Boracay was not affected by typhoons then, however during this this season called the Habagat, southwest monsoon winds, we had to land on the other side of the island (Bulabog) and hike all the way to our resort located on White Beach, our luggage, transported by a water buffalo-pulled cart.  There was no electricity, no air-conditioning and no hot water showers in those days, but our stay was pure and simple pleasure. We had the time of our life!

Boracay Beach Club one of the first handful of “resorts” in the island.

WORK AT WHITE BEACH. Little did I imagine that just after two years, I would return to the island and work for one of the pioneer resorts, and stayed further on for 10 years to manage two small properties, tour operations and transport company.  Within this period, I also handled three small airline companies that serviced Caticlan, two were defunct and the ultimate one was Seair, which I had to persuade convincingly to fly there. The rest is history.

PARADISE LOST- WELL, ALMOST. I left Boracay in 2001 after 10 years of working there as I felt that it was excessively crowded, over-developed in a destructive sense and regrettably deteriorating due to lack of Eco-balance. I ain’t seen nothin’ yet! Returning exactly 21 years since I first came, with over 500 hundred resorts of all shapes, sizes and prices, there is hardly a trace of the pristine, peaceful and perfect paradise that I first saw. It is just chaotic congestion of lodgings, restaurants, bars, stores crowding with vans and tricycles, with no regard for proper zoning, maximum carrying capacity policies, no conservation value for natural environment, nor ecological protection not to mention, it ranks high in climate change risk, most especially on White Beach’s spectacular shoreline. 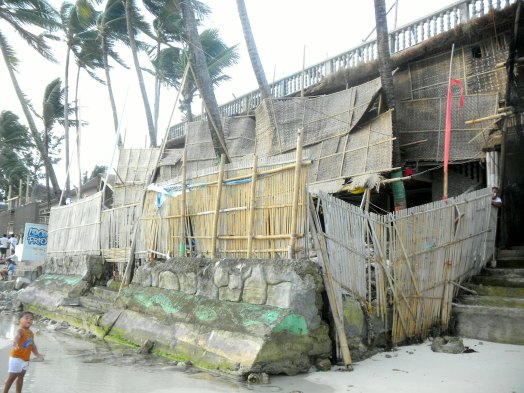 What have they done to the World’s Best Beach?

FULL CIRCLE. It is perhaps the hands of fate that made me return to Boracay in 2010, as a Guest Speaker at Events Asia 2010 and as luck would have it, talk about Sustainable Events Management.  With my experience at Inkaterra, Peru’s Eco pioneer and Conservation leader, I shared my knowledge and experience in sustainable tourism and environmental conservation. In 1975, Inkaterra opened a lodge for scientists to study Peru’s rainforest long before eco tourism was trendy. With over 35 years of experience in sustainable tourism initiatives, it is the first to be carbon neutral in the country, doing reforestation projects in a total of 17,000 hectares in the Amazon and the Andes.

PLEDGE. After having seen the current deteriorated environmental status of the island, a  framework for a new Boracay Conservation, Social Responsibility and Sustainable Development, was conceived for stakeholders and local host community.

THE BORACAY INITIATIVE®- A CALL FOR UNITY AND SUPPORT.  The challenge is to espouse and implement The Boracay Initiative© (TBI) – an Environmental Conservation, Social Responsibility & Sustainable Tourism framework adapted from the UNWTO & Rainforest Alliance. TBI was presented to the island’s multi-stakeholders at the First Environmental Forum in 2010, organized with the cooperation of the Department of Environment & Natural Resources & Environmental Management Bureau -Region VI,  Office of the Mayor of Malay, Aklan, Boracay Foundation & Petron Foundation. However, to date, both public and private stakeholders have not taken it up at all.

LESS CONVERSATION, IT’S TIME FOR ACTION.  Fate brought me back to the island, which we have come to love and cherish, but it is high time for us to take action, less conversation! We must put all our efforts and resources to restore and conserve Boracay Island, its natural beauty and valuable coastal marine environement to provide sustainability, continued economic vitality and resilience for its stakeholders, the Philippines’ tourism industry and the future generations.

TBI was presented once again, to concerned citizens in the island, with the gracious hosting by Mandala Spa & Villas, multi-awarded Spa and ASEAN2012 Green Hotel winner. This time with the Society For Sustainable Tourism & Development, Inc. -SSTDI at the helm, TBI’s Sustainable Tourism, Conservation and Social Responsibility framework is designed to be implemented with the cooperation of both private and public sector of Boracay Island,  with expert institutional partners Zero Carbon Resorts, Green Hotels & The Clean Blue.

So, Boracay Island and the Philippines, when will you begin to espouse Sustainable Tourism?  Conserve & protect the island/ 7,107 islands for the future generations?

Our Society for Sustainable Tourism & Development Inc.-SSTDI offers Capacity Building and Educational programs for hotels, destinations – LGUs, host communities,  private stakeholders and the grassroots and tour operators with Global Sustainable Tourism Council criteria. Training programs for Destinations, Hotels, Tour Operators and Industry in general include Environmental Conservation, Good Governance, Climate Resilience. The objective is to address global challenges of the United Nations’ Millennium Development Goals: poverty alleviation, environmental sustainability and climate change. WASTE TO ENERGY solutions are now offered to LGUs for their ecological solidwaste management and renewable energy solutions. For more information and assistance, contact us.
SSTDI is proud to be part of the Founding Board of the ASIAN ECOTOURISM NETWORK .